The floating bridge over Swan Lake Nature Sanctuary in Victoria, BC

Last Saturday I had an errand to run and decided to walk home after I was dropped off on the outskirts of Victoria. My improvised route turned what could have been a 6-mile slog along busy roads into a 10-mile excursion through a nature sanctuary and quiet residential streets.

The Swan Lake & Christmas Hill Nature Sanctuary is bordered by a highway on one side and a busy arterial road on another. While I have visited Swan Lake in the past this was my first walk up Christmas Hill, astounding really considering I’ve lived here for 41 years!

For many years I admired Christmas Hill and the cows grazing in the pastures beneath it while I sat in a long lineup waiting for a set of traffic lights to change. This intersection was replaced by an overpass in the preparations leading up to the 1994 Commonwealth Games but unfortunately this also led to the green pastures being opened up for development. The grazing cows are long gone but the Garry Oak forest that surrounds the rocky 109m summit of Christmas Hill is intact and includes a network of wonderful walking trails. As you can see by the photos below the 360° views of the southern tip of Vancouver Island are fantastic. Other than the birds and the butterflies I had the summit to myself on this hot Saturday afternoon.

Swan Lake is connected to Christmas Hill by a short trail corridor bounded by residential homes on both sides. At one point the wooded trail opened up and I entered a sunny patch containing dozens and dozens of birds flitting from branch to branch and seemingly unconcerned with my presence. Despite being spoiled for choice I didn’t do a great job of identifying the half-dozen species circling around me, with the exception of noting the handful of big and bold American Robins who seemed just as keen on identifying me.

The 48 hectares that makes up Swan Lake includes marshy areas, woody shrubs and large sections of grasslands. The trail system is highlighted by two floating piers and a floating bridge, the latter of which cuts across the western edge of the lake. The bridge is inhabited by some extremely tame ducks, one feeling comfortable enough to snooze atop the railing as I took its photo from just two feet away. Red-winged Blackbirds and Spotted Towhees were seen and heard on several occasions.

I spent well over an hour at the Lake before cutting across the Lochside Trail and onto residential streets that eventually hooked up to my regular 3-mile route that led me back into the heart of the city. This was definitely one of my best impromptu walks in quite some time and I will not be waiting another 41 years to visit Christmas Hill again! 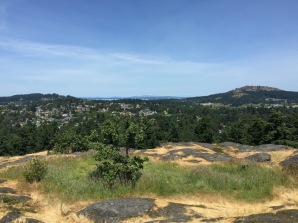 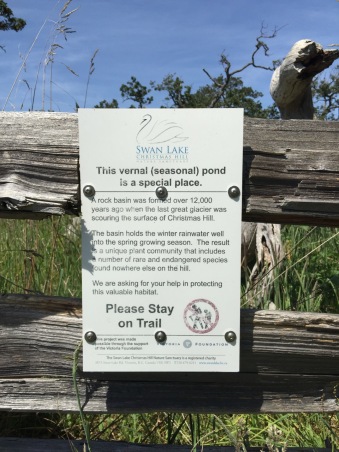 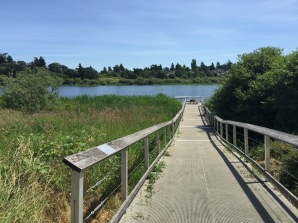