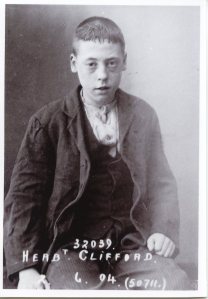 I’m dedicating my walk to the memory of my great-grandfather Herbert Clifford, who disappeared in 1920 and was never heard from again.

I once asked my grandfather about his Dad but he revealed very little and was hesitant to talk about him at all.  Details were thin on the ground: he was born in England, married in Canada, went off to war for half a decade and then abandoned his young family within months of returning. Times were tough but the family carried on, and as the years passed the memories of Herbert slowly faded away. But the mystery surrounding my great-grandfather has always intrigued me and I felt there must be more to his story – and indeed there is.

My search for Herbert began in the early 90’s but it’s only been in the last few years that I’ve made any significant progress.  It’s been a fascinating, and at times troubling experience, but one I highly recommend to others who share an interest in their ancestors.  I’ve devoted hundreds of hours to uncovering the truth and in the process I’ve grown quite close to Herbert, a positive side-effect of helping bring someone back to life.  One of the discoveries was that Herbert and I share a restless nature and a taste for adventure.

Somehow I just know he would approve of walking from Land’s End to John O’Groats and so his photo will accompany me on all 1100 miles.  And as I walk I’ll tell his story, or at least part of his story, because it has no ending – happy or otherwise – for now.

7 thoughts on “In Memory”