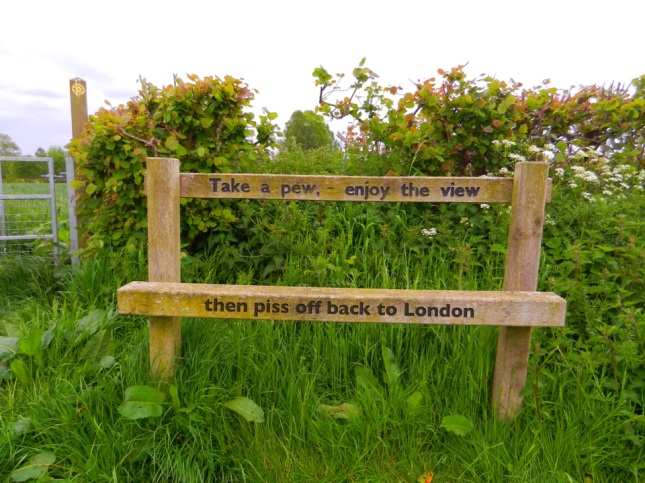 Spotted in Kent and on Twitter (source: The Poke)

My Twitter focus is on history and genealogy however from time to time I stumble upon tweets that could be of interest to ramblers. While the Visit Kent folks might prefer that visitors spend a bit more time (and money) in their county I can’t help but appreciate the local sense of humour, even if the London reference has been photoshopped in at a later date.

A far more interesting find was this excellent article on George Wilson – The Blackheath Pedestrian, an extreme walker from the early 18th century. Wilson became well known for taking bets on his walks including one in August 1814 when he successfully walked 96 miles in 24 hours (and finished with 30 minutes to spare). His most (in)famous wager was when he was offered 100 Guineas to walk 1000 miles on Blackheath in just 20 days. To find out how local magistrates and a celebrated elephant become involved you’ll have to read the story.

While I attracted no elephants on this weekends’ walk it was nice to get back on the trail after a series of minor ailments had put a temporary stop to my rambling. I’m still getting to grips with all the aches and pains associated with the other side of 50. The good news is I’ve discovered that a tube of Bengay and a fine single malt can work wonders.

Perhaps not surprisingly my appreciation of whisky and anti-inflammatories has coincided with an appreciation of birds. I’m not sure if this is related to having spent too much time on Twitter but I do admit to becoming increasingly curious as to what all that damned chirping is about when I’m out on my walks. It’s a bit unsettling really. I have nothing against Birders but I really never saw myself as being one. Imagine my surprise then when I forked out $300 for a pair of binoculars that increased my pack weight by a back-numbing 520 grams!

That being said I am very happy with my Vortex Diamondback 8×32 binoculars and I’m seriously considering taking them with me to Britain next year. What were once small blobs of greyish-brown feathers have been transformed into colourful collections of reasonably interesting creatures. If only they would stop flitting about! 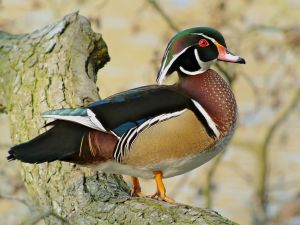 My normal training walk passes by both Blenkinsop Lake and a large stretch of pastureland and so there are lots of previously unidentifiable flying objects to check out. I didn’t take any photographs but in addition to the many bald eagles soaring over the fields I spotted a pair of extremely colourful Wood Ducks at the lake and a sinister looking Turkey Vulture in a field. The former are year-round residents but the latter are only here during the warmer months. While it’s early days yet I hope someday to improve my skills beyond “see the big bird – it’s black and white“.