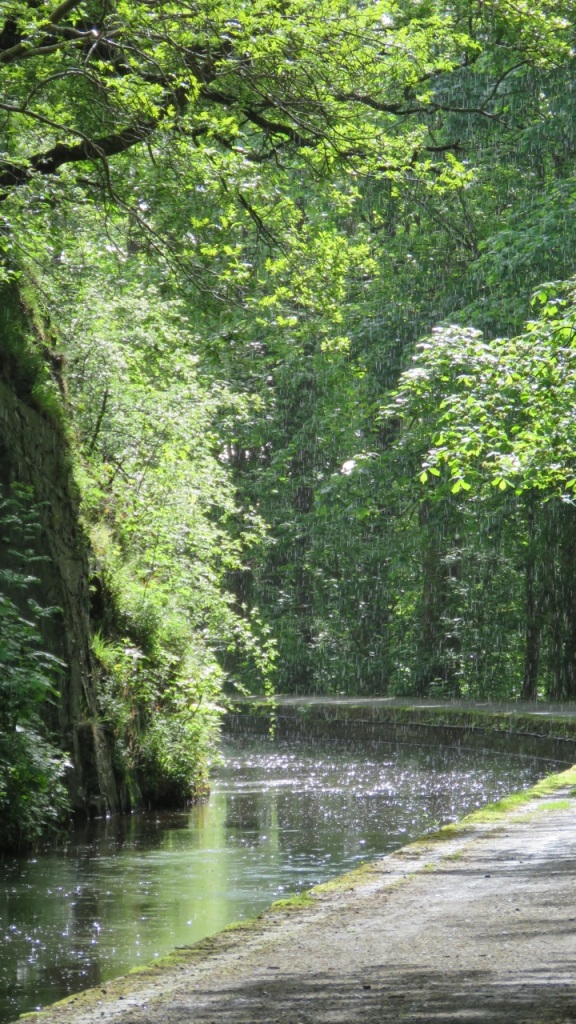 A bright but showery start to the walk

I awoke to bright blue skies and the forecast suggested a fine day with a chance of a shower near noon. In the time it took to eat breakfast the forecast had deteriorated to showery weather with the chance of a break near noon. Nevertheless it was lovely and bright when I hefted my fully loaded pack onto my back and headed up the hill to join the Llangollen Canal.

A 10k run was underway and marshalls were positioned along canal although I never saw any runners in the 3k stretch that paralleled my route. A handful of narrowboats were tied up alongside however most were moored at a purpose-built facility next to the winding hole a couple hundred meters in the opposite direction. I remember the winding hole well as this is where I turned my 69-foot narrowboat around for the return journey to Middlewich in 2003. It looks nothing like it did then but addition of a dozen or two slips no doubt helps to reduce the congestion in the busy summer months.

Within ten minutes of starting out a heavy shower fell from what appeared to be clear and sunny skies. The showers continued on and off but I made good progress through Trevor and then on to Pontcysyllte where I crossed Thomas Telford’s magnificent aqueduct, and World Heritage Site, towering 126 feet above the River Dee. On the other side a narrowboat cafe with a very posh coffee machine built into the bow was tempting but I decided to push on.

Once past Pontcysyllte the towpath was very peaceful and I made good progress. Much of this section was covered by overhanging trees which offered some protection from the increasingly heavy showers. I’d been avoiding putting on my wet weather gear but with the clouds getting darker I decided to take advantage of the shelter and get suited up.

I passed through the Whitehouses tunnel at the same time as half a dozen kids in kayaks but from the din I thought I was approaching the Spanish Armada. They too suffered from some questionable navigation and spent most of the time careening into the tunnel walls at right angles. Nevertheless they seemed to be having a lot of fun doing it.

I carried on to Chirk by which time my right knee was giving me grief, so much so that I thought I’d be unable to carry on. I considered using a bus but being Sunday there were none and so I opted for a cup of tea at the second narrowboat cafe encountered this morning. I sat in the drizzly weather next to the Chirck aquaduct and chatted with three English walkers that had walked from Llangollen and were taking a break before heading back.

After my break I decided to carry on to the next town. My knee flared up now and then however I was able to maintain a brisk hobble for most of the day. By noon the weather seemed to be improving and so I was able to shed the Gortex and enjoy the occasional sunny break.

The towpath wound it’s way out of the hills and into the lovely Shropshire countryside. In my opinion Shropshire is one of Britain’s best kept walking secrets. The Llangollen Canal towpath eventually becomes part of the Shropshire Way which in places was a bit rough underfoot but wonderful for wildlife viewing, and in unexpected ways too. I met an older gentleman walking his barn owl, as you do. The owl was perched on his arm and he commented that he had a messy face because he was a messy eater. He was a wonderful looking bird despite the messy face.

A frustrated Heron sharing the towpath with a relentless walker

Marton Locks were the first I encountered on my walk and although they are few and far between on this side of Ellesmere that is certainly not the case on the other. If I remember correctly we navigated through 25 locks on our trip from Middlewich to Llangollen in 2003 and of course the same again on our return trip. Today’s walk featured nearly 40 bridges and a single Heron who, like the sheep I encountered yesterday, I repeatedly drove forward for at least a mile.

Another shower rolled in but it would prove to be the last one of the day. By the time I reached Frankton Lock, at the junction with the Montgomery canal, it looked as though the sun was here to stay. I took a brief break on a bench and then continued on, sticking to the towpath rather than following the Shropshire Way across the fields. Judging from the towpath very few people did so. I did however walk by a narrowboat that had just moored for the day. It contained two friendly couples who offered me a cold beer and canalside chat. Things had warmed up considerably and so the beer and conversation were just what the doctor ordered.

I continued on towards Ellesmere which eventually rejoined the Shropshire Way. I remember cruising this stretch back in 2003 and the rural views are truly magnificent. By this point in my walk I had covered nearly 20 miles and so despite the beautiful scenery I was greatly relieved when I hobbled in to Ellesmere. 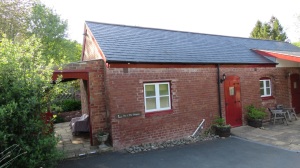 I was staying at Mereside Farm just on the edge of town which provides excellent self-catering accommodation for singles. I stopped into town for some groceries and got some helpful instructions from proprietor Nicky and a local I met along the way. Before long I was resting comfortably in my room in a converted stable block. The former occupants were in a field only meters away and I wasn’t sure how they felt about this. However I was far too exhausted to give it more than a passing thought.

My knee was feeling better but I’ve decided to invest in some new walking shoes and so tomorrow will be spent in Shrewsbury looking for replacements. 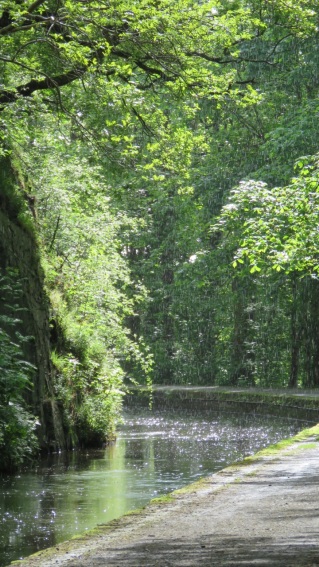 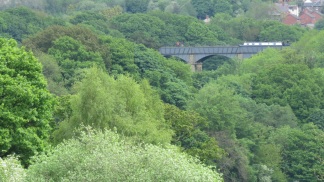 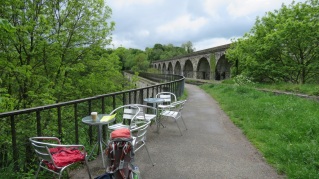 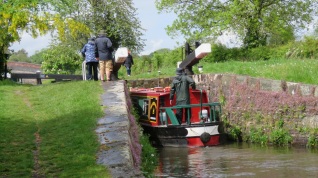 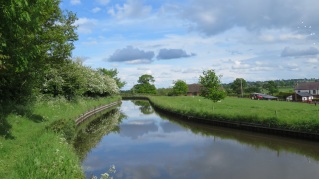 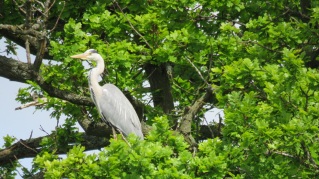 I’m currently in the beautiful North York Moors and sitting in my b&b as the rain is drumming away on the roof. The silver lining to these dark grey clouds is that the inclement weather provides a perfect opportunity to do some long overdue blogging. 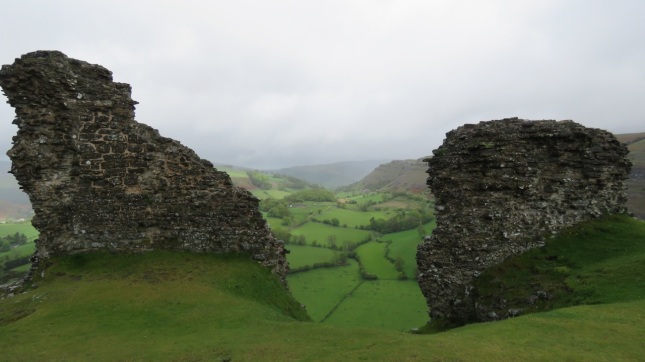 The view from Castell Dinas Bran

I arrived in Britain just over a week ago and immediately headed north to Chester where I stayed for four nights. I spent much of the time researching at the archives, visiting my great-grandfather Herbert and making a day-trip to Huddersfield where I visited Royd’s Hall School and paid my respects to a young Canadian who died in the First World War.

On Friday I made my way to Llangollen by way of Wrexham. When I was last in Llangollen I arrived by narrowboat and I remember thinking to myself that one day I must return to do some walking. It took 13 years but today is that day. It was late afternoon and so I took a short walk down the towpath and through the town before tucking into one of the best sausage and mash suppers I’ve ever had. Judging by the crowds at The Corn Mill this was par for the course.

Saturday morning was misty but the showers appeared to be lifting when I headed out from my b&b. I didn’t get past the driveway before I realized the showers were going nowhere and so on went the wet weather gear. Suitably encased in Gortex I began the steep trudge up to Castell Dinas Bran looming high above the town. Lower down the trees provided some protection but once I emerged into the open I was slammed by wind and rain. The clouds and mists lifted enough to provide some stunning views but it was a struggle keeping the camera lens dry as the sheets of rain lashed the hillside. A series of switchbacks led the way to the top and the climb, weather and full Welsh breakfast combined to make it a challenging start to my walking holiday.

After exploring the castle ruins I descended via a different and very steep route to a short paved track. This led to a narrow road that followed the valley wall and formed part of Offa’s Dyke National Trail. I followed this north for a mile or two with great views to the west and a sheer cliff face rising up to the east. The rain was now intermittent but the skies weren’t promising enough to tempt me to remove my wet weather gear.

I had two possible routes planned for today but with a long walk tomorrow I was leaning towards the shorter (12-14 mile) option. However I spent too much time looking at the wonderful scenery and entirely missed the shortcut I intended to take. I studied my OS printouts (no GPS this trip) and found an alternative route was possible a mile or two further along. Almost immediately Offa’s Dyke left the road and followed a track along the steep hillside for some distance before descending though a forest where it met a road near a ford.

I’d been walking for two and half hours without a break and so I took a breather on a bench near the junction. It was only a five minute walk from World’s End Farm and so I thought this was an appropriate spot to turn back in the direction of Llangollen. I followed the beautiful quiet road, nestled in the valley floor and running alongside a small beck. Green fields on either side were chock a block with happily grazing sheep, cattle and horses. 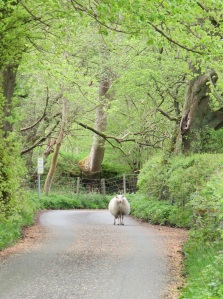 A short way along I encountered a lone sheep walking along the road in my direction. It stopped and stared for a long time trying to determine what I was and whether I was moving in its direction. It eventually realized I was and turned tail and fled. Hemmed in on both side by fences and hedges it had nowhere else to go. A mile later I noticed a father and son working in a field of full of sheep marked with the same dye as the runaway. I caught the farmer’s attention and he quickly bolted for the gate. The sheep got ahead of him but she was no match for the Border Collie that quickly shepherded her back into the fold.

Not long after this I left the road for the Clwydian Way and followed a footpath that made a long slow turn around a hillside. There were a few fields to cross but much of it was on a dirt track which slowly rose to offer nice views to the west. The ruins of Valle Crucis Abbey were clearly visible as was the plume of steam from the train that whistled its way down the Dee Valley.

By this time patches of blue sky were appearing and so I took a break and happily removed my wet weather gear. A mile or so later a heavy shower forced me back into them, frustrating given Llangollen was less than half an hour away. Predictably the sun returned ten minutes later and once again it was off with the rain gear. I eventually rejoined the path that ran below the castle and began the steep descent into Llangollen.

The final leg of my walk was eventful as at some point on the descent I did something to my right knee and hobbled the last few hundred metres into town. Back on level ground I cleaned the mud off my Ecco walking shoes when I noticed the sole in my right shoe had split all the way through. Although these shoes were well over a year old I was shocked to have them fail like this on my first walk. Any decision regarding my shoes would have to wait until after tomorrow’s walk, a 20-mile ramble from Llangollen to Ellesmere in Shropshire. 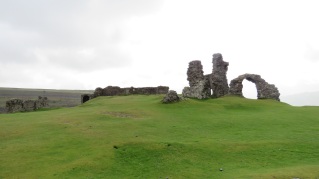 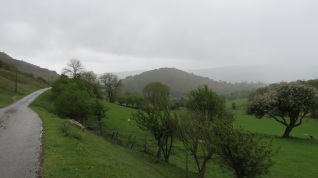 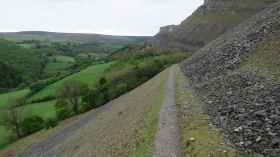 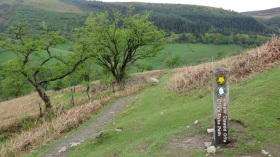